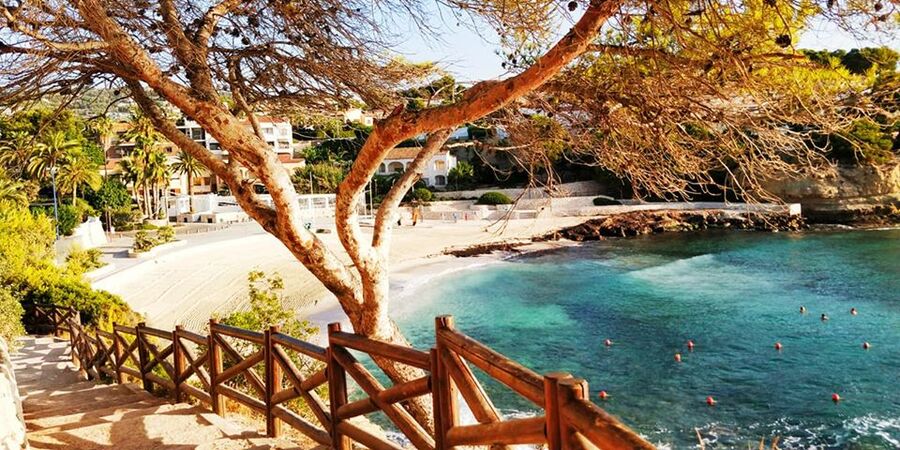 “Calpe has the rock, Benissa has the views!” – Benissa, Costa Blanca

Benissa is one of the oldest towns on the Costa Blanca. With a population of 13,000 in the municipality, it is a bustling centre for shopping and sightseeing. It has an abundance of bars and restaurants with a beautiful central plaza.

The town and coast of Benissa are picturesque and have a lot to offer. However, in comparison to its neighbouring towns of Calpe and Moraira, it attracts fewer holidaymakers. Its beaches are smaller and mostly stony, which in no way detracts from its beauty. It is the perfect place to relocate if you want more privacy and peace.

The town is perfect to stroll around. It has a medieval feel and this is evident in some of the architecture. The white walls and the odd heraldic shield for the eagle eyed history enthusiast. The people are friendly and always welcoming to visitors.

The jewel in Benissa’s crown is the stunning neo-Gothic Marina Cathedral or the Church of the Purissima Xiqueta. It was built in the 1920s by the residents of the town on behalf of the rich Freemasons. It towers over the main plaza with its palm trees and circular fountain.

There is a popular saying in the Costa Blanca; “Calpe has the rock but Benissa has the views”.

Driving along the coastline of Benissa Costa you can be forgiven for thinking you’re in the Cote D´Azur in France. The views are spectacular. There are rocky outcrops, plunging cliffs and lush evergreen trees. Wild and dramatic, it is punctuated by secluded and private coves and inlets.  The sea is crystal clear. 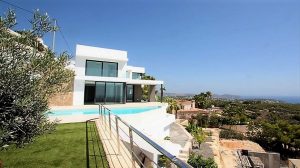 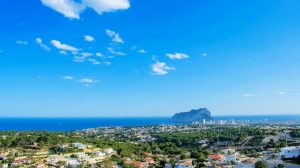 The landscape is dotted with luxury villas worth multi millions. For the wealthy are drawn to this area. Relatively unspoilt, it is a magnet for those with sailing boats and a love of water sports. The neighbouring coastal towns may attract more holidaymakers but that is perhaps, the way the residents here would like to keep it.

The most popular beach is at La Fustera. The sand is golden and the water is pristine.  There is a busy chiringuito  which serves sandwiches and burgers for lunch and excellent dishes for dinner in a beautiful setting. Furthermore, if you’re a gin drinker they have a great selection. There is a kids playground and an ever present coastguard so its a popular choice for families. 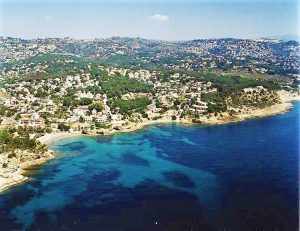 Cala Advocat is a small, stony beach which attracts snorkellers.

Les Bassetes has a small marina with a dive centre and a sailing school. There is also a bar and restaurant.

The coastline is also a big attraction for fishing.

The town takes its name from arabic tribal origins. As with many other towns in the province of Alicante, “Beni” means sons.  Issa refers to the name of the tribe who occupied the town.

The area was ruled by the Moors until the Christian conquest in 1248 by James ll of Aragon. The last Muslims were expelled in 1681. The town has a spectacular fiesta at the end of June to commemorate the battles between the Moors and Christians. 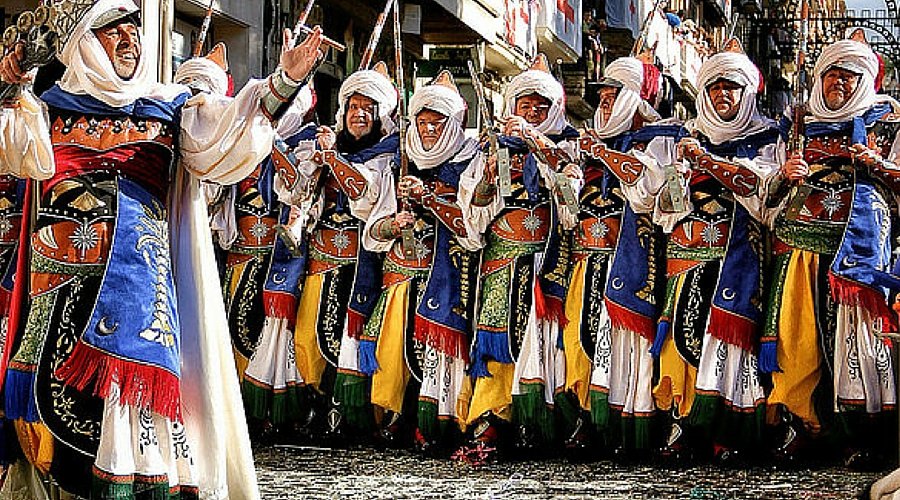 Originally, as with most of the coastal towns, the town was surrounded by a high stone wall. These were built to protect the town against African pirates who plundered the area in the 15th and 16th centuries.

The town is steeped in history so put on some comfortable shoes and enjoy the walk. The Lonja de la Constitución and Ethnological museum are worth a visit. There are signs of the towns bourgeois past in the fascinating, Casa Museo Abargues. This is a 19th century stately home preserved intact with its original furniture and fittings.

From the coast there are some spectacular walking routes that take you up to the cliff tops. The views are breathtaking. The route “Ecological Path” starts at Aula Del Mar and goes North and South. Along the route you will find boards that give information on history, culture and wildlife.

The Galería de Arte on the Partida San Antonio exhibits the work of Georgie Poulariani His work is a stunning example of the welded steel sculpture that you will see all over the Costa Blanca area. Most of the roundabouts have examples and some of them are works of  art in their own right. 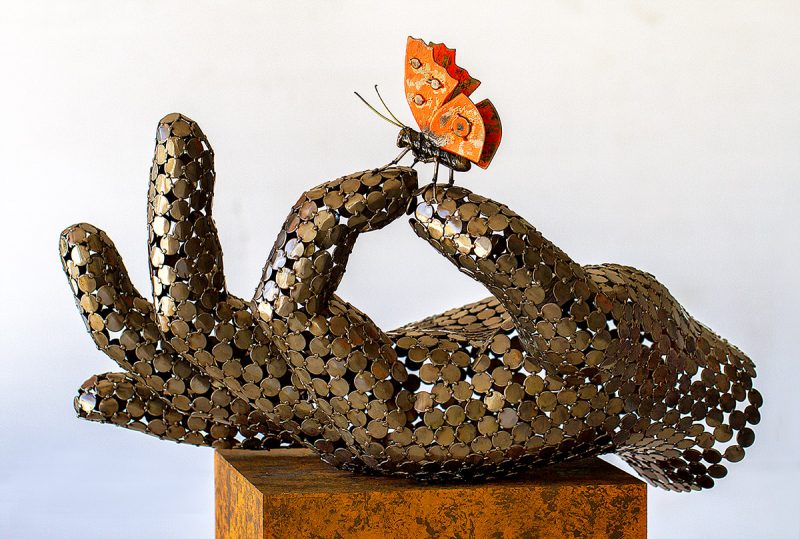 If you’re visiting the area there are some amazing hotels and Casas Rurales. Casa Del Maco, Hotel La Madrugada, Casas de San Jaume and Hotel Montemar are a short drive outside the town but a great starting point for the whole area. If you want to be central Number 4 Benissa is a stunning boutique hotel.

Benissa has lots of supermarkets, banks, butchers and bakers, as well as any other service you need. There is a fantastic fresh produce market every Saturday which winds its way through the old town and in to the central plaza. Its a lovely way to spend a Saturday morning even if you don’t want to buy much. Wander round and have an ice cream in the plaza, sitting next to the fountain. 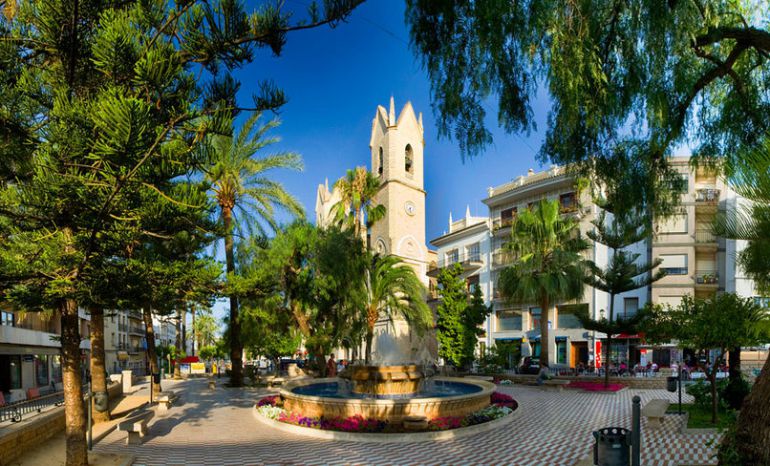 Benissa has some excellent places to eat to suit every budget. Casa Del Maco is one of the best and its a beautiful setting for a special celebration. Pedramala is also exceptional if you want steak. Nou tapas Vizcaino and Cuina de Dos are very good for Spanish tapas. If you want to fill your belly with an excellent 3 course “menu del día”  for 10 or 11 euros (and that includes wine and coffee!) try Bar Frau, opposite the Mercadona supermarket in Benissa town. It has a great atmosphere and for no frills food, its unbeatable. Also a very good chance to practice your Spanish.

Benissa is a bustling town with something for everyone. If its bright lights and nightclubs your after, head for Moraira or Calpe. Benissa Costa is a place of contrasts. Of peace and tranquillity and breathtaking views.  Its a wonderful place to base yourself to explore the Costa Blanca. Its also a wonderful place to settle if you want to relocate…… to a wonderful place next to the sea.

” I LOVE THE BEACH. I LOVE THE SEA. ALL MY LIFE I LIVE WITHIN- IN FRONT OF THE SEA”  Rafael Nadal