Gata de Gorgos is a small town along the N332 from Alicante to Valencia. Many people just drive through, but Gata de Gorgos is definitely worth a visit. The town is situated on the banks of the Gorgos river, where it gets its name from.

But Gata de Gorgos is also known as 'the Bazaar of the Costa Blanca' because of the traditional artisanal shops that decorate the streets. Most of the craft shops are located on the Avenida de la Marina Alta that crosses town, and around the Plaza de España and its surrounding streets. With more than 50 shops, there is something to suit every taste and budget. This unpretentious town even boasts two traditional guitar workshops!

Gata de Gorgos is famous for its wicker products. Wicker is a weaving technique that uses all kinds of pliable plant materials. Many of the baskets, hats and bags on offer in Gata de Gorgos are made from the locally harvested 'esparto grass'. In Southern Spain, esparto has been used for millennia, with the oldest baskets dating back 7,000 years.

There are countless traditional shops in Gata de Gorgos. One of them is Artesanía Rosario, family-owned since 1965 and run by the second generation. Here you will find hand-made products of esparto, raffia, bulrush, rattan and bamboo. They have a large collection of bags, baskets, espadrilles and 'sombreros', but also sell hammocks, lamps and furniture. Don't forget to get one of those sturdy shopping bags that every shop sells. The local women have been using them for centuries! 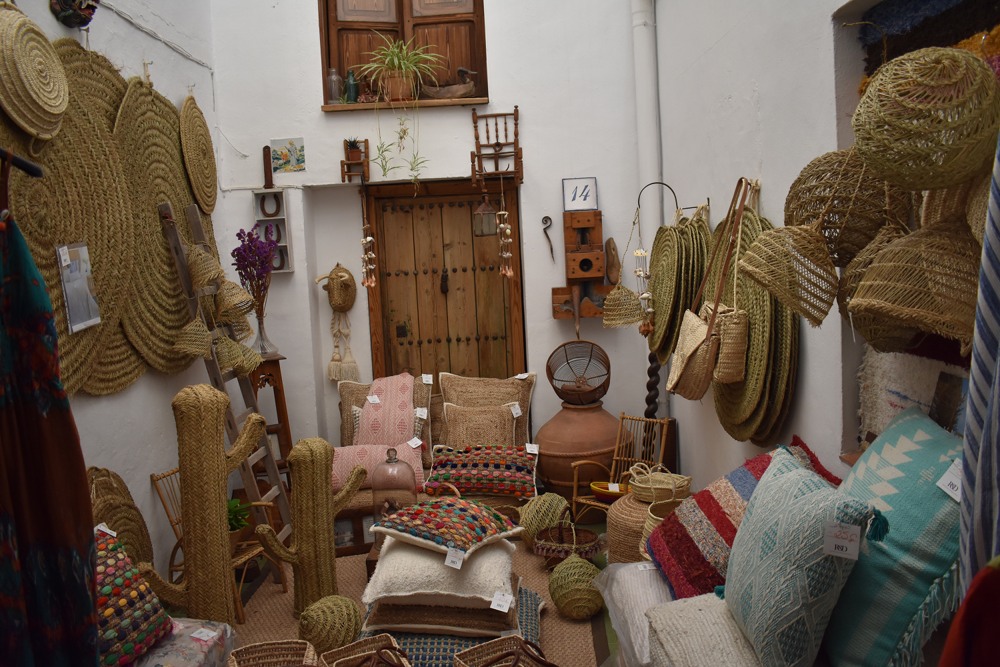 Gata de Gorgos also has a decent selection of furniture shops. Looking to add some Southern Spanish flair to your home? Tucan Mobles is a favorite and offers a large selection of furniture and home decoration made of bamboo and rattan. Reciclaje Decoración is a more modern type of shop. As the name implies, they offer natural, sustainable and recycled products. Such as hand-made rugs and cushions, made of 100% recycled left-over cotton from Valencian textile factories.

Gata de Gorgos boasts not one but two artisanal guitar makers. Guitarras Francisco Bros is run by the brothers Adam, Juan and David Broseta and was founded by their grandparents in 1974. Their instruments are sought after by musicians from all over the world and have found their way into the hands of Amy Winehouse, Ed Sheeran and The Black Eyed Peas. Joan Cashimira’s workshop (which does not have a website) on the Calle Estacio has been going strong for three generations, since Joan’s grandfather made his first guitar more than 50 years ago. You can go and see the craftsmen at work on weekdays from 9 to 13 and from 15 to 18.30.

Need a coffee break after all that shopping? According to Wikipedia, Gata de Gorgos has an unusually large number of bars and restaurants per capita. We’re not so sure if it’s really that unusual! Spain has the second-highest amount of bars per inhabitant in the world and this does not seem to change anytime soon.

Jacaranda Spain work in the Gata area listing and selling property and we will be very happy to take you to the local shops where the baskets are made.