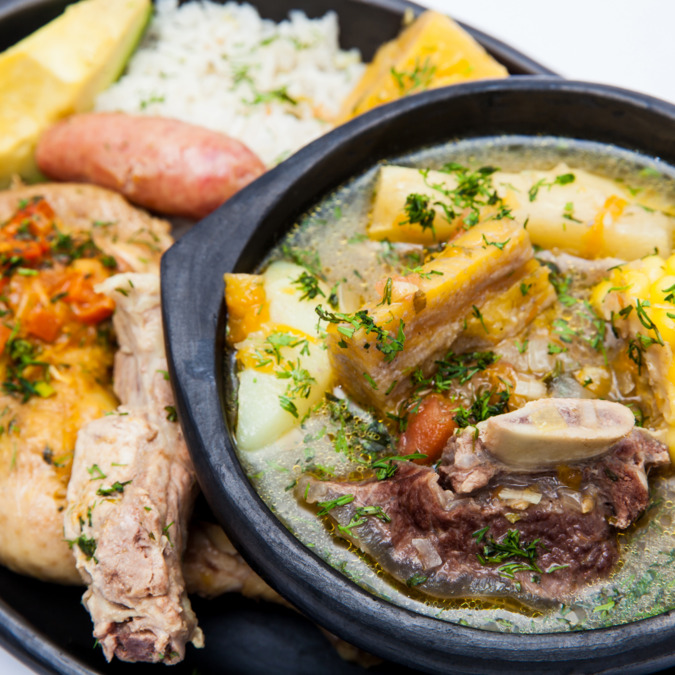 Winter is almost upon us here in the Jalon Valley. Although it has been unseasonably warm lately, with temperatures reaching a balmy 24 degrees, it is sufficiently fresh in the mornings and evenings to start thinking about winter stews and casseroles.

One of Spains favourite dishes is the Puchero, spelt Putxero in Valenciano. It was traditionally eaten on christmas eve and the serving of it is part of the ritual.  A real winter warmer, this nutritious stew is hearty and surprisingly healthy. The word Puchero originallly referred to the big earthenware pot it was prepared in. You can use any pot but make sure its a big one, this stew is made to last a few days and feed the whole family!

The dish varies greatly from region to region but it consists of a variety of meats, vegetables and legumes and either rice or fideos ( small pasta pieces ).  The meat is usually attached to bones and this is all added to the stew to give maximum flavour. You could look at 6 or 7 recipes and each could be different but you can use beef, ossobucco, chicken breast and legs, pork or veal and offal. Chicken livers are often used to garnish the caldo (stock) which is used to cook the rice or pasta. This is served before the meat and vegetables. A really good puchero has pelotas added. These are meatballs wrapped in cabbage and made with mincemeat and pinenuts.

1. Prepare the pelotas- mix together all the ingredients in a large mixing bowl and form into balls. Wrap each pelota in a scalded cabbage leaf and refrigerate until needed.

2. Add all the meat except the chicken and livers to a big stewing pot. Cover with water and boil on a high heat for 25 minutes. Skim off the fat and simmer for an hour and a half.

3. Add the vegetables, except potatoes and chickpeas and boil for 15 mins.

4. Add chicken, livers and pelotas and simmer for 45 mins

5. Add the chickpeas and whole potatoes and simmer for 30 mins.

6. Strain off the broth.

7. Add to a separate pan 125 grams of rice and half a litre of stock per person. Bring to the boil and then reduce the heat until the rice is cooked.

Serve the rice and broth, garnished with the livers.

Plate up the meat and the vegetables on a separate plate, putting the plates on the table so that everyone can help themselves.

The whole process can be done a day in advance and with time tastes even better. Start by buying fresh ingredients from your local market and butcher and ask advice as you go. However it has to be said it is a real pleasure to go to one of your local Spanish bars when they are cooking the Puchero. They usually have a blackboard and they will write it up the day before so look out for it! Take a whole afternoon out and enjoy it with a carafe of wine from the local bodega. Autumn lunches really do not get any better than this!